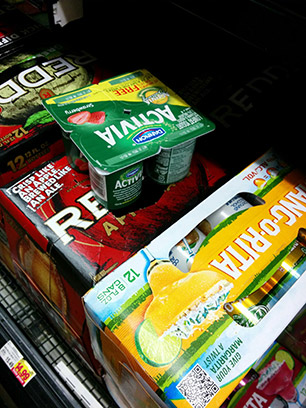 An idea struck. Knowing how his favorite piss-water, Bud Light, causes the flaming lava shits, maybe Bud Light Lime Mang-O-Rita would be an even better natural cure to his constipated state and prevent the escalation to inflammatory bowel disease.

With his colon close to rupture, Duke did a quick Internet search for "probiotics." The search results returned this disgusting gem of information, which put the final nail in the Jamie Lee Curtis yogurt-shaped coffin: Probiotics are "Billions of living bacteria cells".

But alas, things didn't work out as planned. Gallantly, he poured can after can down his gullet like a cheap sorority girl on the last day of Spring Break untill the box was empty, causing him to fall into a sugary, malt-induced coma. A few hours later, he found himself becoming anally intimate with a strange man in the ER.