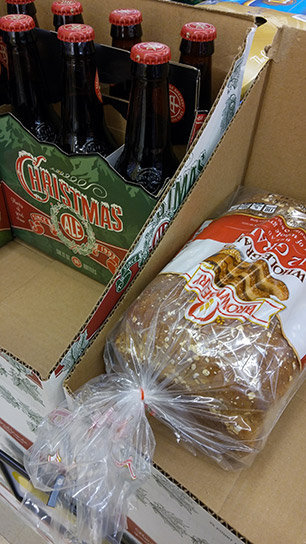 Courtenay stopped perusing the discount makeup section at the Dollar Store. She stopped treating Duke to fancy dinners out at Taco Bell. She put every cent she earned toward cooking classes, holiday gifts, and the ingredients she'd need for her Great Great Grandmother's secret recipe of French Toast Casserole (recipe can be found of the back of any bag of Pepperidge Farm bread).

On Christmas Eve - as Santa was readying his reindeer and sleigh loaded with gifts - Courtenay was working just as hard, making her ingredient list and checking it twice at the grocery store. Eggs: check. Milk: check. Butter: check. Bread: check. Everything was there.

Satisfied, she turned down the last aisle of the store headed straight for the checkout... and that's when she saw it. The festive packaging, snow-capped scrolly lettering - the Christmas Ale was so enticing! Her careful budgeting of the past few weeks had absolutely no wiggle room (she'd already had to choose discounted, expired milk to afford the ingredients she'd collected so far) and if she wanted to ale, something would have to go.

I think you know how the story ends.